Mr. Osamu Tsuji, Chairman and CEO, paid a courtesy call on Dr. V. Ramgopal Rao, President of the Indian Institute of Technology, Delhi (IIT Delhi). We were told that the plasma CVD system "PD-2S" (delivered in 1985) and the optical CVD system "UVD-10" (delivered in 1990) for solar cell research are still used by many researchers and students, and have been published in many papers as research equipment. 35 years of stable operation and active support for IIT's research activities were given us words of gratitude.

We have contributed to the development of science and technology in India by supplying a large number of equipment to major universities and research institutes in India, such as IIT Bombay and IIT Lurkey, in addition to IIT Delhi. 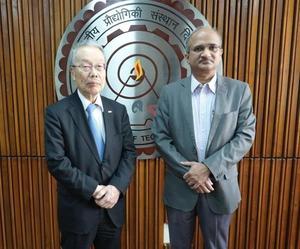